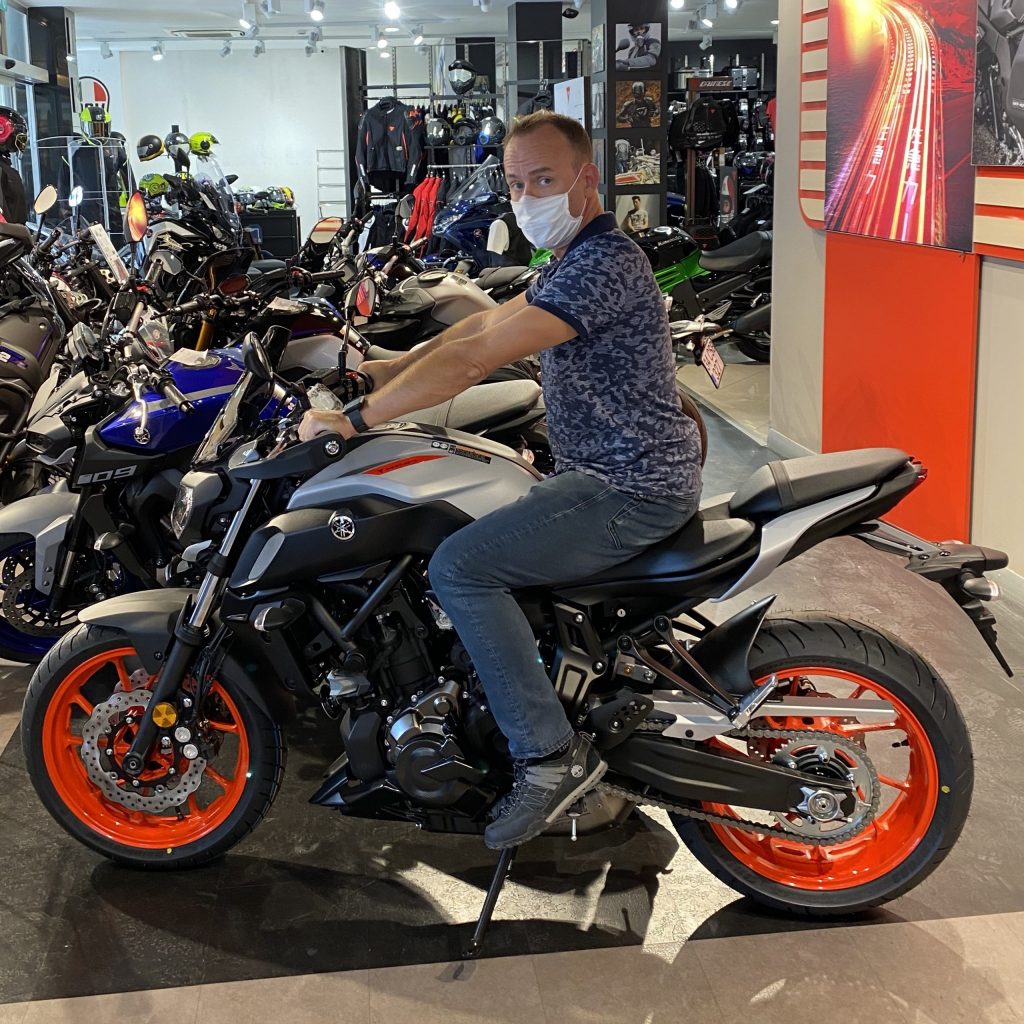 I bought a new 2020 Yamaha MT-07 a few days ago and went on my first ride. I want to share my initial impression of the bike in the context of other motorcycles I’ve owned and myself as a rider.

First off, I’m 5′ 5″ (165 cm) tall, so clearly in the “short rider” category. I’m male and weigh about 145 lbs (66 kg), so probably average weight for my height, but lighter than many riders (in the US, anyway). I’m 46 years old and have been riding street motorcycles for around 22 to 23 years. I’ve owned maybe 8 other bikes, including Yamaha R6, R1, Ducati 848, Honda VFR 800 (sport touring?), and two different Ducati Monsters; one air-cooled and the other water-cooled.

I won’t directly compare the MT-07 to any of the motorcycles I mentioned because I didn’t do any back-to-back test rides. I may compare and contrast some specific attributes, but those comparisons will be based on memory, so not entirely objective.

Now about the bike I bought. Again, it is a 2020 Yamaha MT-07 with the Ice Fluo color scheme. The bike overall is mostly black, but the tank and rear pillion plastics are greyish white with orange-red accents. The wheels are the same orange-red and are pretty loud, visually. I’m reasonably sure this color was meant to appeal to younger riders (twenty-somethings), but I like it all the same. The dealer had already installed several aftermarket accessories that made the bike look more impressive in the showroom, including an Akrapovic titanium slip-on, a Puig touring windshield, and other accessories.

Following is a breakdown of the various characteristics of the bike – completely subjective, of course.

Lots of good things have been written about Yamaha’s 689cc parallel-twin engine, and I couldn’t agree more with that sentiment. This motor is a gem. It’s torquey throughout its rev range and has plenty of power for any sane road riding situation. It seems much more refined than I expected it to be, and I felt minimal vibration in the handgrips and footpegs.

The MT-07’S transmission works nicely with the engine. The bike pulls well in all gears, and none of them felt too tall or short or oddly spaced. Clutch lever pull is lighter than I expected for a twin, and engagement is progressive, not “snatchy.” Shift lever action was precise, up and down the gears. I never missed a shift, and neutral was easy to find too.

During this first ride, I never really had the need to get on the brakes hard. I think for most street riding, the brakes are probably just fine. They felt progressive, not grabby, and had adequate stopping power for the riding I was doing today. I usually like brakes with more initial bite, but, as I mentioned, most of my previous riding experience was on sportbikes and premium sporty naked bikes (my Ducatis had high-end brakes).

Like the engine, a lot has been written about the MT-07’s suspension. Unlike the engine, the reviews about this component have been unfavorable. Reviewers often compare the shocks and fork to pogo sticks! I rode on various roads, including cobblestone streets, rough byways, and short stretches of smooth, fast highways, and I didn’t get the impression that the suspension is terrible. The seat did kick me in my rear-end a few times on some bumpy patches of asphalt, so not perfect, but far from terrible. At this point, I’d rate the suspension as adequate, not harsh, but not plush either. I may write a follow-up review about the stock suspension after I’ve put some more miles on the bike.

I found MT-07 to be quite comfortable. The riding position was much more upright than any previous motorcycle I’ve owned, except for the VFR, perhaps. Somehow the bike manages to feel sporty while providing pleasant ergonomics for the kind of riding that I think most people would do most of the time – city, suburbs, moderate highway jaunts, and twisty public roads. I think I’d prefer a slightly wider bar with a little less rearward sweep at the grips, but that’s just an ergonomic preference. A new bar wouldn’t be needed for additional steering leverage, though. The bike is light and flicks quickly. It just goes where you want it too without needing to muscle it around.

So what’s my overall first impression of the 2020 Yamaha MT-07? In short, it seems like a great bike. It has an excellent engine, good overall ergonomics, and feels much more refined than what I would have expected from a bike at this price point. I also think this bike will work well for a wide range of riders, in terms of style and experience. I’m not sure it’s the best beginner motorcycle, but it would be a good one – may be the best second bike, though, depending on how you like to ride. The bike is also great for old heads who feel that their race-replica supersport riding position is starting to suck.